Besieged By the Weather

As I write this post, I sit up late into the night – like I do many nights. But this night is different. I am listening to the sound of icy snow and hail thrash against my window, driven by a strong easterly wind. Normally, I would find the idea of snowy weather highly exciting – but not this time. This time, I find the weather to be threatening, worrying, and ominously oppressive. 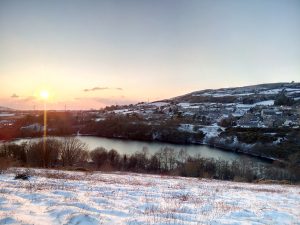 Under a blanket of snow; homes and meadows, lake and mountain are all frozen and under siege to the weather

It all started 5 days ago on Monday. The warnings about the ‘Beast from the East’ and weather chaos. Now, the UK does ‘weather chaos’ regularly – If it is more than -1 C, it is declared to be a winter crisis, and if it gets more than+25 C, the country melts and something must be done about it. In other words, we have a very temperate climate that is moderated by our coastal geography. So I pretty much ignored the forecast. On Tuesday and Wednesday morning it was clear that this snow storm meant business – a decent amount of snow fell and temperatures absolutely plummeted to -6 here. Which is highly unusual as we usually have westerly winds bringing warm air in from the sea. The forecast had originally predicted things to improve on Thursday, but the severe weather warnings were extended until Saturday, and have now been extended again until Monday.

My first thought was ‘oh my god – my bees’. This has not been a good winter for beekeeping for me. The bees didn’t hibernate due to warm temperatures and ate all their stores before the new year. So I have been supplementing with fondant, but it doesn’t give much margin of stores – especially when it’s cold and the bees won’t take the fondant. But I just had to trust that the bees would be okay.

So, we firstly got snowed in, then iced in. On a business level, I have been having to cancel appointments. Both visits to clinic and house-calls; sometimes having to postpone an appointment more than once as the weather stays inclement. It is in some ways embarrassing, and on the other hand a nuisance having to do this. But a smile came to my face that nature can still exert enough of an influence in our lives as to make our diaries and calendars useless.

However, by Thursday, nuisance had given way terror.. Storm Emma brought winds of 71 MPH to our village. We have had gusts that high before, but never for such long periods of a sustained battering as that storm gave. The noise was unbelievable – like an express train thundering past the window. Trees thrashed around like wounded monsters, wailing and groaning. Snow blew about everywhere – more an anarchic dance about the garden as it blew horizontally rather than fell from the sky. Even new style double glazed windows with good seals seemed to let an icy chill of draft through into our home. Couple that with a windchill of -12 C and it made life uncomfortable. The whomping wind disturbed all our sleep. But the wind was not just a hindrance to comfort; it was damaging. All over the surrounding area houses have slates off (including ours) and some have significant damage to their roofs. We awoke, bleary eyed from lack of sleep to find every inch of ground outside covered with flotsam and jetsam deposited by the wind – along with broken glass (neighbour’s greenhouse), shattered roofing slates, bits of wood – structural and tree, and endless leaves and needles, ripped off the evergreen trees.

It truly felt like being under siege… …Potentiated tenfold by the timing of this weather. Around the start of meteorological ‘spring’ starting. This felt more like weather for the darkest depths of midwinter! The weather forecasts show more bad weather to come, and it’s starting to gnaw at my nerves a bit.

In addition, at the height of Storm Emma, the BBC radio stations went off air from the local transmitter for almost 18 hours, and the mobile phone mast went down. Might not seem much, but it added to the feeling that something was ‘happening’.

Yet I can’t help feeling how much more terrified pre-modern societies must have felt in times like this. There was, in their mind, little guarantee that normality and kinder times would ever return – that things may never be as they used to, and that they may be plunged permanently into darkness. How that must have felt! I’ve had a small taste of it, and can’t say I want more. 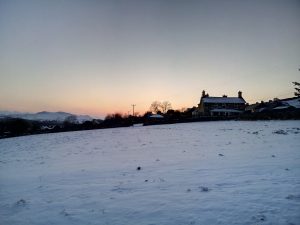 Although the weather is still having another bite, it is now gentler than the main force of the storm was yesterday. We are still iced in but the snow has gone, and warmer air should return soon to melt the ice.

The bees are okay by the way. I gave them fresh fondant today and they started eating immediately. How they survived the furious, icy wind I have no idea. But they did. As did I. But I am a bit shaken… my respect for nature has been renewed and I consider myself to have learned some very important lessons this week. And, just like my ancestors, part of me wonders “When will this end? When will spring return and normality resume?” I don’t know, but I’m sure that, as the climate changes, we will see more of this sort of weather. Perhaps in our modern world, we all carry the seed of an ancient terror – of being absolutely helpless and completely vulnerable – and wholly impotent in controlling the weather and its effects on our immediate surroundings, schedules, and even lives.

Wherever you are in this world, keep safe!