Ar Lan y Môr (Down by the Shore) 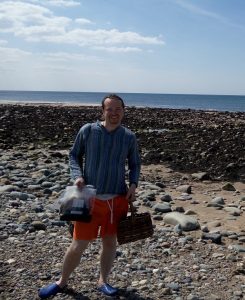 As I get more into the ‘Silly Season’ of full-time (and then some) work, I’m becoming ever more aware of the need to make time – even just in small chunks. The half-hour here, or the morning there. So it was today – I’ve been getting interested in the idea of foraging for some time now – beyond just foraging for medicinals – as I realise that there is a whole ‘nother world out there waiting to be explored and experienced.

So it is that seaweed has been calling to me – I first became interested in seaweeds after attending a workshop with Seamus and Roisin (The Twae’ Corbies) at last year’s Scottish Radical Herbal Gathering. They are young & vital, but also chilled out and ‘Celtic’ so we gelled really well. Their inspiration stuck in me, but the time of year was wrong to 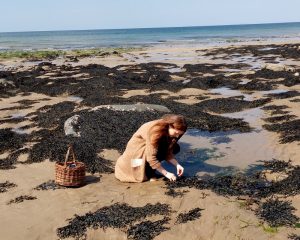 explore the rocky shores. Until now.

Fast forward to this spring and just as the mushrooms called to me last year, this spring, seaweeds called me down to the shore. I have gathered Fucus (Bladderwrack) for a couple of years now, but not really looked deeper than that.Like a shopper, I took what I wanted and left… without really seeing what else there was. This time, I saw.

The spring has been rather grey and cold here in Wales – not today. An almost deserted beach, in almost mediterranean sunshine proved an ideal place to get to know seaweed in the company of herbal Anam-cara Lowrian. So, my favourite beach, a place that I have gone to to think  since I was a teenager yielded up its bounties. 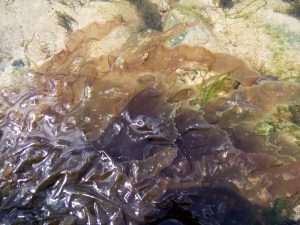 First thing we saw was vast stretches of Laver, growing like thick black plastic clinging to the Cerrig lafer – the laver rocks. As a Welshman, I’m overjoyed by this as we eat it cooked in oatmeal as part of breakfast (or at least do if we can get it – seaweeds are not liked as part of a modern western diet. Ask someone if they want Laver, they’ll turn up their nose – ask if they want Nori alongside their Sushi and they’ll think you’re cultured. Ych a fi!).

Next, we found lots of

gutweed, sea-lettuce, and smaller amounts of Kelp, Sugar-Kelp, and pepper dulse. Small bags of each were co-

llected and taken home to be dried over the Aga. Or, in the case of the Laver, boiled down for almost 8 hours before being blended into a thick paste. If anyone is interested, I shall post the recipe for Laver at a later point.

A lovely afternoon spent with a great friend. The call of the shore will bring me back before too long. You’ll find me Ar Lan y Môr

Categories: Out and About