Report from the Green Gathering

So, after experiencing the very uncomfortable sensation of writer’s block, after a good sleep, I can now write the report of the green gathering I originally wanted to! I haden’t originally thought I’d be able to go to the gathering, but I’m so glad I did. Below are my thoughts:
The Herbal Bit 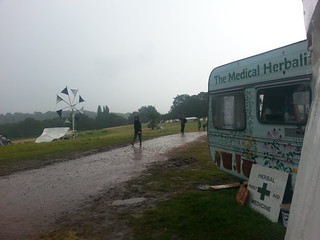 The first thing to say is that the entire experience of the festival, and crewing as a Medical Herbalist was amazing. It’s something I’ve always wanted to do, without even knowing it: Like I’ve found something of a calling. Sitting in a clinic room is easy, ministering to acute healthcare needs when you have a new patient every 10 minutes, with a queue forming, and having to think on your feet really tests your knowledge. It is also comforting at this stage of being a new practitioner: the first instinct when you finish training is to look every single thing up in the books, and ask someone else’s advice about every case. Not because you don’t know your stuff, but because the ‘safety net’ of your tutors and advisors is gone. The atmosphere of the medical tent does not allow that at all, beyond occasionally informing the shift leader what you’re doing. You have to be fast, and effective. It’s no use taking an hour to do a case history, prescribe a slow working medicine that will take a week to work and then see the patient in a week’s time… You have to prescribe something in 5 minutes, and it had better work in 30 minutes to 2 hours duration. If the patient returns, it will likely be in a couple of hours, and your intervention should have worked by then.

Also it was nice to work with other herbalists I have not yet worked with before. In the university, I got to know my course colleagues really well, and so working with them became a habit – with the other herbalists I met at the Green Gathering, I had to start from square one of learning how they work.

The cases were also like nothing I have ever seen in clinic. In any one shift, I might get 4 or 5 minor injuries (who I passed along to a qualified first aider), 2 or 3 cases of upset stomachs, bowels, whatever, 2 or 3 more serious cases such as intoxication with liquor or drugs or infections, insect bites and stings, and one really serious case every now and then. We had a lot of children come to us – bites and stings mostly, some upset stomachs and constipation. The nice thing with children is that they’re very easy to treat. The wonders of being young with outstanding vitality!

The more serious cases were both personally moving and also very helpful to my development as a clinician: The first one was a gentleman who presented with bruising asking for something to take away the swelling/bruise. On examination it became clear that he was in quite a lot of pain, had significant swelling, and inability to flex his wrist or perform fine movements with the ulnar distributed fingers: Suspected fractured ulna. Another gentleman sustained a spinal injury, and we had to immobilise him on a spinal board while keeping his neck stable and performing neurological exams, pain relief, and administering Entonox and monitoring his clinical signs while waiting for a paramedic, all while keeping the patient (who was in some distress) calm. Both were interesting to me as it is the first time I have dealt with emergency medicine, paramedics, and hospital referral.

The gentleman with the broken ulna had an ORIF the next day, and was still recovering in hospital when I left the festival, 3 days later. The spinal injury sustained cracked ribs, chipped vertebra and discharged himself the next morning

The funny thing with the spinal injury was that I wasn’t even on shift when I helped with the case: I had been out watching some bands and enjoying a cider (It was Saturday night after all) and was just on my way back to my tent to collect my towel before going to the sauna, when I noticed that there was something serious going on in the med tent (which I had to walk through to get to the medical crew camping) and so pitched in and helped as things were busy/low on crew. Three hours later, after he had gone to hospital, I managed to get to the sauna – just as it was closing! I will never forget Jim, the shift leader’s husband, turning up with a large tray of tea, just before the second ambulance arrived to take the gentleman to hospital. It was a welcome relief for everyone, even the paramedics had some!

So all in all, hugely valuable clinical experience for me, I shall definitely be back!
The Best of the Rest 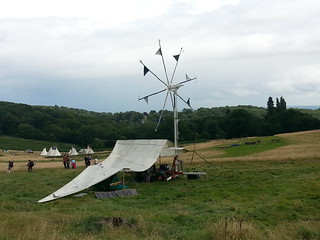 Of course, the Green Gathering is the kind of event that I would like to do to, even if I wasn’t a Medical Herbalist. This is the kind of stuff I’ve been interested in since childhood, and, with my involvement with Cae Non, has an extra relevance. It was a great opportunity to go to some workshops, but mainly just to talk to people and swap ideas, and see other people’s way of doing things. Exchange contact details and leaflets, and learn from other people’s mistakes and successes.

I was particularly impressed by ‘Rocket Stoves’ these are double-draft stoves that can either heat an additional thermal mass, make charcoal, wood gas, etc. I actually made one in a workshops from tin cans (Not sure how long that metal would last) but of course couldn’t bring it back on the bike. I learned how to make a clay/cobb bread oven in another workshop. I’ve just got to have one down at the Cae. I talked to someone else about running vehicles/generators off wood-gas, and the benefits of bio-char in soils (which I have been going on about for at least 2 years). I met up with an old acquaintance, Nick, who makes pedal generators for education, and small live events. I talked to a great guy who had brought a Greek style ‘Mykonos’ Windmill on a tower attached to the chassis of a truck. He was using it to run an alternator, directly drive a lathe, and to compress air for his air-tools. Really inspirational that clean energy doesn’t have to be electrical – mechanical is so often overlooked these days in an electricity addicted world.

The wood-fired sauna and hot tub was amazing – thanks for bringing it Robyn! – I have realised that the sauna is amazing at stopping rheumatic pain, and I so need to build one.

There were a myriad of smaller conversations and exchanges too numerous to write about – all helpful and interesting, and all leaving their mark on me. Beyond that, it was 4 days of great company, great music, and great development in me as a person and a practitioner.
Personal thoughts

I don’t often write about my personal beliefs with my herbal medicine hat on. But this time I will. I do follow the ‘wheel of the year’ and the old Celtic festivals. The Green Gathering came on the weekend of the festival of Lammas or Lughnasadh, a time when traditionally, meetings and gatherings were held, and festivals conducted, with a full turn out of every class of society. It felt so right to be going to an event at this time of year, and it being the first such event I went to as a qualified herbalist. Almost like I was taking my place amongst my peers as a fellow professional, to do something I’ve trained to do for the last 7 years, and be recognised as such. Something just fell into place…
Some Photos

Here are some photos I took at the Green Gathering…

Categories: On The Road